Skip to content
Back to blog
Leadership |
8 min read

What do 300 pink flamingos, a billionaire and an Aussie entrepreneur all have in common?

As we peer through Richard’s binoculars from his golf buggy, we observe Necker Island’s second most famous residents - 300 pink flamingos. As we count the newborns, Richard explains to me that the babies are perched on mounds and are actually born dull grey - they develop their unique colour over time as they grow up. Introducing the species and building it into a flourishing colony is one of Richard’s favourite parts of Necker Island.

My entire life I’ve made it a point to learn from people who have left larger-than-life legacies. I’ve always had an affinity for those who have made the world a better place. From Michelangelo who painted the roof of the Sistine Chapel 500 years ago, to Albert Einstein who rewrote physics, to Oprah Winfrey who has disseminated pieces of light into our living rooms for the last 35 years, and indeed, Sir Richard Branson, one of the most iconic entrepreneurs the world has ever seen. Whether I’m learning about a painter from the 1500’s or spending weeks at a time with a modern day entrepreneurial icon, I find it fascinating that the values and principles that guide their lives are remarkably similar.

Being invited back to Necker Island to spend a week with Sir Richard Branson and 30 of the world’s leading entrepreneurs and innovators, turned out to be a magical adventure in many ways. Whenever I spend time with Richard, whether it was helping to craft the curriculum for his Branson Center of Entrepreneurship in 2010, spending a week on Necker Island in 2014 after the tragic explosion of a Virgin Galactic Spaceship, or the week we’ve just had, each experience is different and carries with it new realisations.

So, before I tell you what 300 pink flamingos, a billionaire and an Aussie entrepreneur have in common, let’s take a look at the main three lessons I got from this most recent week with Richard Branson.

1. Win The Game Before It Begins

Over breakfast one morning I asked Richard if he remembered stealing my friend's watch off his wrist when they were having dinner at Raes in Byron Bay many years ago. What followed was a lot of laughing and a story that was as insightful as it was hilarious.

Richard recalled that many years ago Virgin Atlantic needed to buy a bunch of airplanes but didn’t have the cash. Richard set up a meeting with the supplier, followed by a dinner with both of their teams, in the hope of requesting a much needed $6 million discount on the planes that he had hoped to purchase.

During the meeting, despite Virgin’s many attempts, they were not able to negotiate the discount. Later that night when both of the teams were out at dinner Richard did what Richard does - the unexpected. “If I can hypnotise someone in this room in the next five minutes, without anyone realising, you have to give us the discount.” The Chairman of the aircraft supplier, knowing full well that Richard is not a hypnotist, agreed to the humorous wager.

Exactly five minutes later, Richard turned to the Chairman and asked what the time was. The Chairman looked at his wrist and much to his surprise noticed his watch was missing. Absolutely startled, the Chairman starts to look around the room and all of a sudden realises that his very expensive watch is now on the wrist of Richard Branson. Having successfully heisted the Chairman's watch without anyone noticing was good enough for the other team to agree to giving Virgin the $6m discount.

Even more fascinating was what Richard shared next as we sat around the breakfast table overlooking the turquoise water surrounding Necker Island.

“The funny thing was, I had actually stolen the watch before making the wager. So I’d won the game before it began.”

While this was a very funny story shared in good humour over breakfast, I couldn’t help but be startled by just how indicative this anecdote was of how Richard has always approached business. He has always found creative, and often funny ways, to win the game before it’s begun.

When Virgin were buying their very first aircraft from Boeing, they didn’t know what they were doing because they had never operated an airline before. As such, to minimise the risk of buying a very expensive Boeing 747, Richard negotiated that if the business was not successful, they could return the aircraft after 12 months.

Iconic entrepreneurs are often held up as wild risk takers. While this is true to some extent, it is not the full story. Yes, high level entrepreneurs are risk takers, however the risks they take are highly calculated. This is a universal principle you see playing out in the careers of great entrepreneurs who have had longevity; they consistently engineer the game in such a way that maximises the upside potential while minimising the downside risk.

2. Prioritise Your Energy And Vitality

One morning Richard took a small group for a 17km bike ride up and down the mountains of neighbouring island, Virgin Gorda. At 72 years young, Richard convincingly beat the rest of the group, leaving many of his much younger riders feeling sick from the sheer exertion of the mountainous bike ride. Returning to Necker Island, Richard then hit the tennis court. For three hours he competed against one opponent after another, again convincingly beating each of us one at a time - many of us 30 years his junior.

From all of my experiences with Richard, the one thing you should always expect, is the unexpected. After swiftly taking care of me on the tennis court, he invited me into the net to get a photo.

“Put your racket up for the photo, people will think you won.”

He said kindly. We put our arms around each other, I raised my racket with a big smile, and before I knew it his glass of water was being poured over my head. This was a hilarious moment that Instagram has since dubbed, “The Virgin Baptism.” 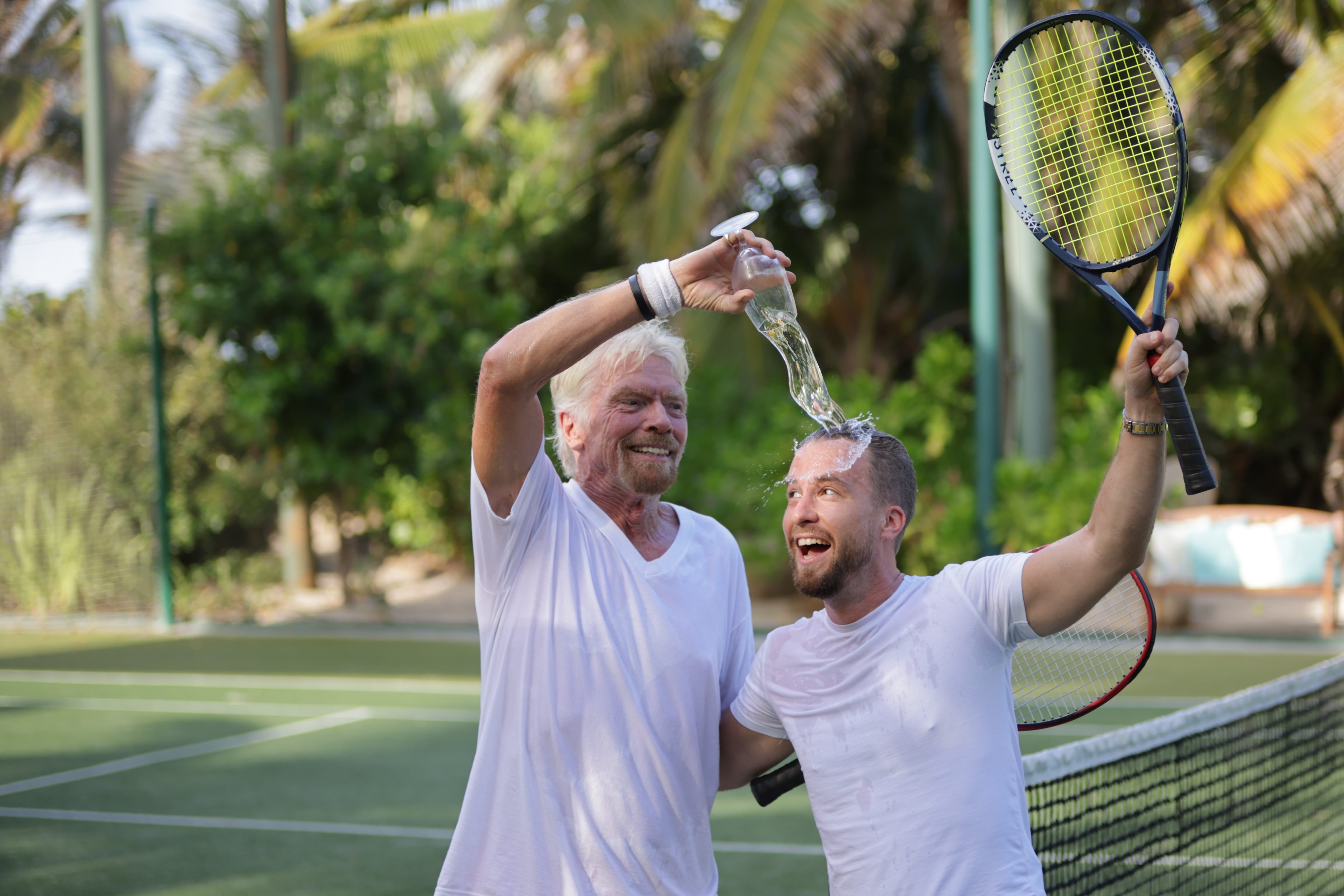 It is truly remarkable just how much energy, endurance and physical skill Richard has. When I asked him where his energy comes from he said,

“You have to find ways to exercise and it has to be fun for you. That way you’ll want to do them all the time and it will keep you in great shape. There really is no other way to do it. The key to having a good work ethic in business is exercise.”

On the Sunday afternoon my phone lit up with a message from Richard, “Come to my house for a drink. Guy I’m playing much bigger than me so need cheer leaders! Richard.”

He was playing in the Virgin Gorda Tennis Final, against a player 30 years younger and much bigger than him. That was the first and only time we saw Richard lose something that week, going down to a very capable opponent.

A couple of days later, we were back peering through his binoculars at the pink flamingos and their dull grey babies perched on the mounds. He talked me through how since losing the tennis final he had spent the last two days studying Rafael Nadal’s serve. He had found footage of Nadal serving and had been studying it. He had also sent it to his tennis coach for them to work on together.

“It really is remarkable how much you can learn from watching him serve. I mean the footage was always there, I should have studied it before the bloody final!” Richard said, laughingly.

Once again a casual conversation in good humour had stopped me in my tracks. This approach was so telling of Richard’s high-performance mindset that has been so instrumental in his success. Richard has always had a strong self belief. His strategy is that whenever he wants to do something or improve in something, he simply finds the best in the world and studies how they have done it. If it’s something in the field of business, he may even try to employ them.

This is a principle that is consistent amongst the greats that I have studied and been fortunate enough to spend time with; they weren’t born great. They simply understand that if one person can achieve something, then all they need to do is model how the other person is doing it, work hard at it, and they too can develop the skills that will lead to their success.

Oftentimes we can look at these larger-than-life figures and see them as superhuman. They are not superhuman - they are just like you and I.

Fallible, carrying the same insecurities, the same imposter syndrome and messily making it up as they go along, just like the rest of us.

Richard was not born a great entrepreneur. He started his first business, Student Magazine at the age of 16. One of his quotes as he reflects on this period of his life is, “I never wanted to become an entrepreneur, I just knew I needed to become one in order to keep my magazine going. In many ways I became an entrepreneur by accident.”

The lesson here is that the greats were not born great.

They progressed imperfectly, consciously developing the skills they needed in order to forge their own unique path in life.

This has also proven itself to be true in my own journey. Something I have learnt over almost two decades in business is that everything is a skill. Being able to dream big visions is a skill. Being an effective CEO is a skill. Being a great entrepreneur is a skill. Harvard has been producing research since the 1880’s proving that happiness is a skill - no different to learning the violin. This innate knowing that everything is a skill has been a hallmark of my journey. It has meant that whenever I come up against something I want to master, I know it is simply a case of doing the work to develop the skill. If something is even remotely possible, I have always considered it to be within my reach.

So... What do 300 pink flamingos, a billionaire and an Aussie entrepreneur all have in common?

We were all born dull grey, until we developed the colour that would make us uniquely ourselves. 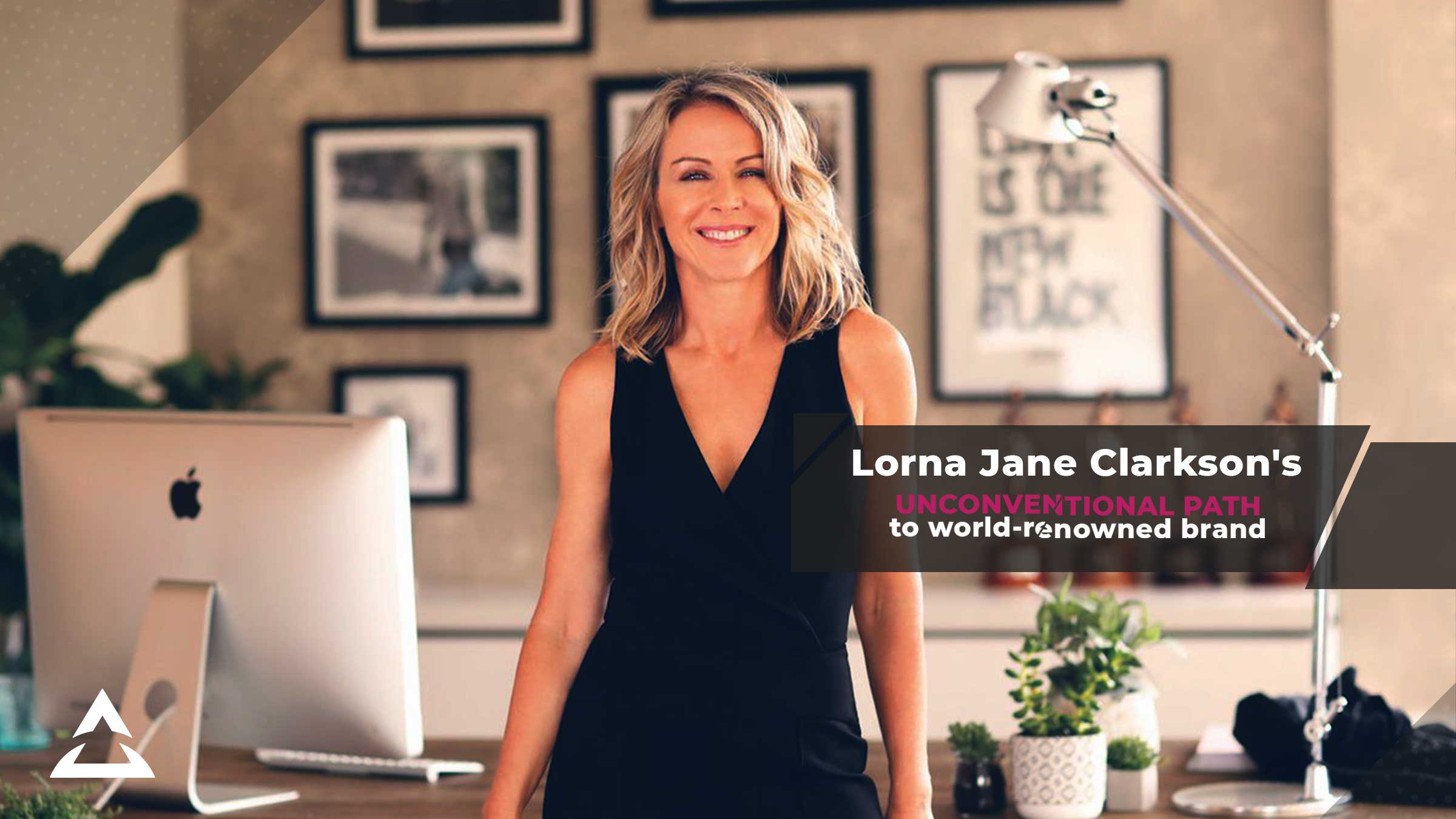 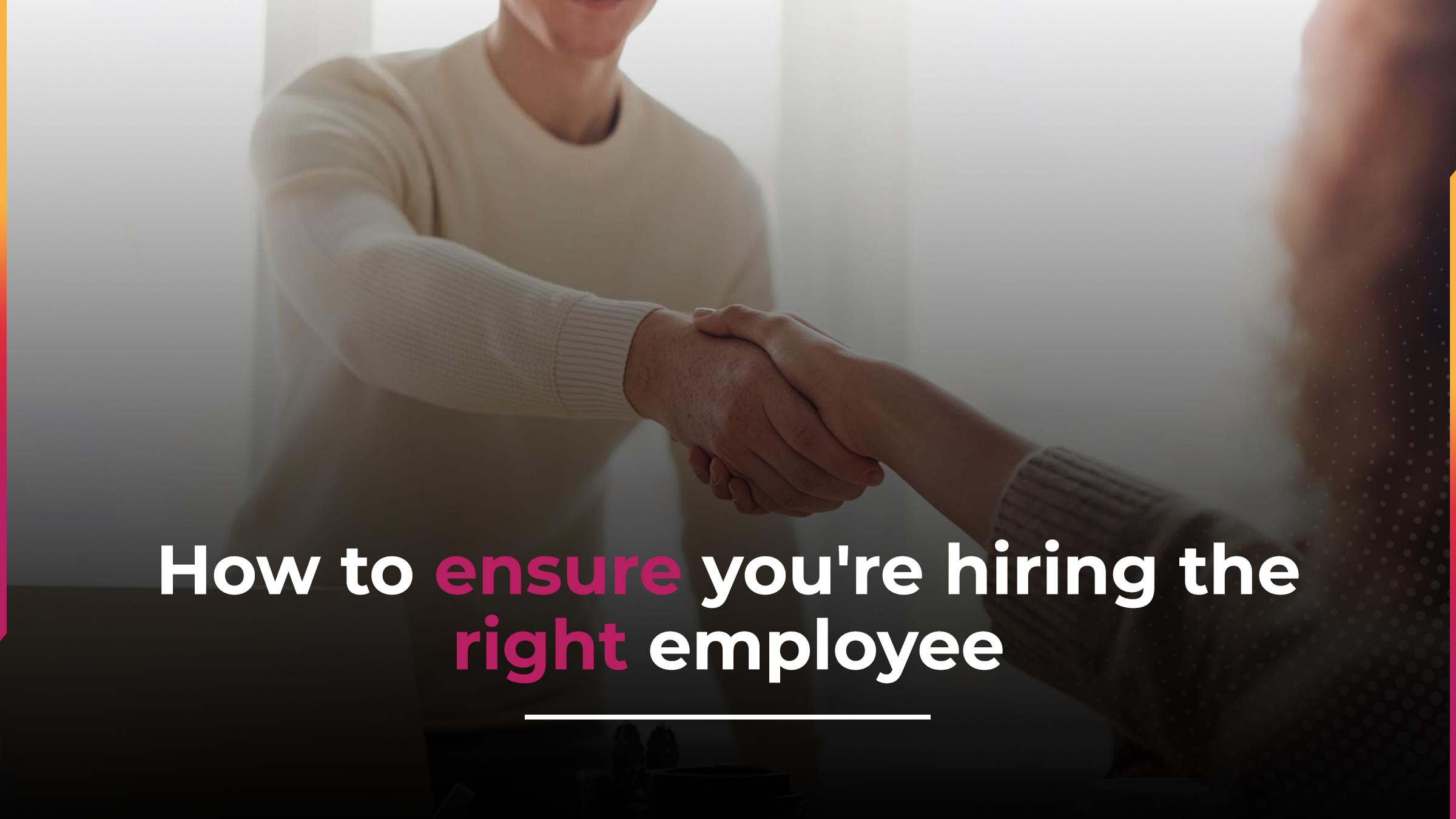 7 Tips To Hiring The Right Person In Australia

How to Test Your Business Idea or New Product